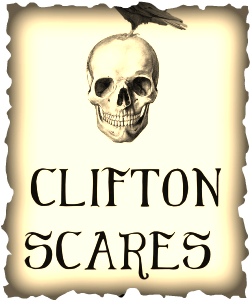 History
The Clifton Haunted Trail began in 2000, and continued uninterrupted until 06, when a powerful storm significantly damaged the main bridge. The trail recommenced in 09 after the bridge was restored in 07. Clifton, VA is a small civil-war era town in Fairfax County, originally known as Devereux Station in the 1800's. Many battles during the Civil War were fought near this town, such as in Bull Run. Many of the historic homes and commercial residences are said to be haunted. Ghost sighting stories are usual chatter amongst the town residents. Furthermore, a "haunted" bridge located in Clifton is considered one of the most famous legends in the United States. To learn more about the Bunny man legend Select the You tube videos below:
Clifton Haunted Trail